Our journey down life’s highway can resemble how we drive on a daily basis. Think about it. Have you ever been driving down the highway maintaining th 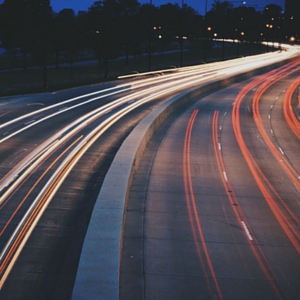 e posted speed and suddenly realized that as you merged with traffic, your speed steadily increased? In the process of driving, you began to keep up with the traffic around you. At first, the change in speed was barely noticeable, and it wouldn’t get you pulled over by the police. It was just a few miles over the speed limit. However, as more and more vehicles crowded the highway, your speed kept increasing to stay with traffic.

Gradual Disobedience of the Law

You suddenly looked down at the speedometer. Imperceptibly, your speed increased as the number of cars around you increased. You realized you were going more than ten miles per hour over the posted limit. You could easily be stopped by the police and get a ticket. However, It is unlikely you would be stopped. Being in the middle of a pack of speeding cars reduces your risk of a ticket. So you speed on.

The life of a Christian can easily follow the same scenario. You are traveling down life’s highway maintaining the posted speed and following God’s commands. Every day as non-believers surround you, lapsed believers, and well the world as a whole, you find your self-adjusting your speed and behaviors. Those changes are subtle and barely noticeable at first. Gradually, the changes become more noticeable. Before you know it how you live your life more closely resembles that of a non-Christian than it does the life God prescribed.

One Compromise Leads to More

We all do it. We compromise on a daily basis on seemingly small things. Perhaps we no longer cringe when we hear foul language. We tell the “little white lie” to avoid a touchy situation. Rather than say no to someone, we say “I’ll get back to you.” And then we don’t get back to them. We see a friend or colleague heading down the wrong path; perhaps they are married, and they begin a “harmless” flirtatious relationship at work that leads them beyond flirting to an affair.

“I appeal to you therefore, brothers, by the mercies of God, to present your bodies as a living sacrifice, holy and acceptable to God, which is your spiritual worship. Do not be conformed to this world, but be transformed by the renewal of your mind, that by testing you may discern what is the will of God, what is good and acceptable and perfect.” (Romans 12:1–2, ESV)

It is so easy to think that the little things don’t matter. However, when we compromise on the little things, it opens a door for compromising on bigger and bigger things. It also gradually erodes our awareness of God’s voice, guidance, and commandments for our lives.

““So whatever you wish that others would do to you, do also to them, for this is the Law and the Prophets. “Enter by the narrow gate. For the gate is wide and the way is easy that leads to destruction, and those who enter by it are many. For the gate is narrow and the way is hard that leads to life, and those who find it are few.” (Matthew 7:12–14, ESV)

No one will make the right choice 100% of the time. However, when we keep our eyes on God, we are more aware of the temptations.  We know when we are keeping up with traffic (the world). With awareness comes a readiness to maintain control. We are more able to obey God’s law even when others are speeding down life’s highway and away from God.

“But be doers of the word, and not hearers only, deceiving yourselves. For if anyone is a hearer of the word and not a doer, he is like a man who looks intently at his natural face in a mirror. For he looks at himself and goes away and at once forgets what he was like. But the one who looks into the perfect law, the law of liberty, and perseveres, being no hearer who forgets but a doer who acts, he will be blessed in his doing.” (James 1:22–25, ESV)